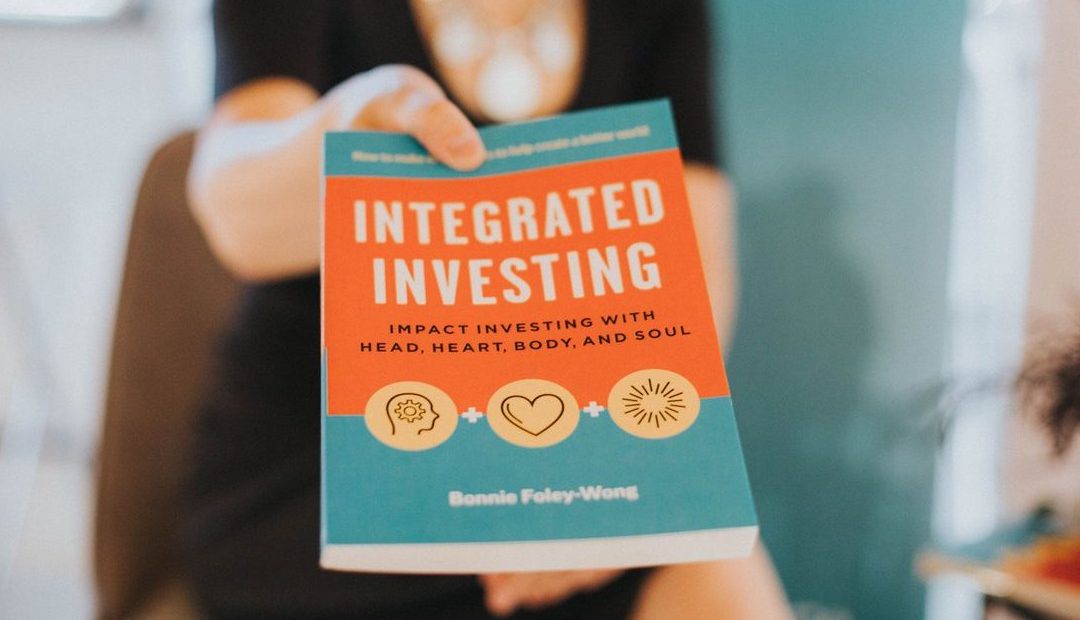 The Fall is a great time to start something. Harking back to school days, I still associate the Fall with the start of a new year.

Five years ago, in November 2016, I published my first book, Integrated Investing: Impact Investing with Head, Heart, Body, and Soul. But it was conceived long before that. Early forms of the ideas, concepts, and frameworks that went into Integrated Investing emerged in 2011 after I moved from the UK to Vancouver, Canada. The seeds of these ideas and methodologies were often prompted by someone asking me what I believed the “impact” in “impact investing” was.

Frustrated by my own lack of coherence and cohesion across the ideas, in Spring 2012, I took the first step towards writing some of it down. Thanks to mind maps, an author’s workshop, and a writing group that I was part of for a short period, I created the first (and second and third) outlines for the book.

I admit I second-guessed myself often. Where do I start? Which idea must come first in the sequence of chapters in a book? What would make the most sense for someone picking up this book for the first time? What would help someone tangibly take steps to be more purposeful or impactful with their investment decisions?

In 2013, I realized I needed more support as a first-time author and I decided to work with a writing coach. This was an important critical step and I recommend it to anyone who wants to get unstuck, have an accountability partner, and get great coaching or advice. I recognize the privilege that I had in being able to find and connect with an amazing coach – Brooke Warner – thanks to my social and professional network and to have the resources to afford a writing coach.

Working with a coach meant I had to actually write – to have pieces of writing as a starting point from which I could improve and for my coach to critique and comment on. I needed to create the clay from which I’d shape my book. Whatever outline I had at that very moment, it was good enough, and I was tasked with writing the book, in that order – not jumping around as my ideas came to me, but to put context to an idea, explain the idea, and expand upon it before moving onto the next, and write complete chapters. It felt challenging at first to calm my creative, rambling mind and let my intellectual, logical side of my mind participate – holding my own feet to the fire, organizing my thoughts, and bringing the coherence and cohesion that originally motivated me to write the book in the first place.

By Fall 2014, I had 85-90% of the book complete but I took a pause. For some more context, I was writing this book, while working full-time, while engaging with investors and entrepreneurs around my first fund, Pique Fund to get that launched, and through 2014 I was pregnant with my first child. With her birth in 2014, almost everything slowed down. About nine months later, I sat in front of my laptop, committed to completing the book. By September 2015, I had a finished manuscript – my first finished manuscript. I tried out traditional publishing and queried a number of publishers, but in Spring 2016 I decided I wanted creative control and ownership over the book and chose to self-publish. Since then, I’ve learned a lot about pitching and proposing opportunities to others – investors, media publishers, event organizers, customers. It’s been fun to look back on those early queries and observe where improvements could be made, but that’s a story for another day.

Just like with finding a great coach, finding aligned and exceptional partners made it possible to publish the book to a high standard. Thanks to the team at Page Two, we produced a beautiful, professional book that can be found online through independent book retailers and through the big online booksellers.

It took five years and lots of support from my community to bring this book to life. It has also taken another five years to really embrace the book. I still refer to and apply the concepts from the book as decision-making tools – my guiding principles or “north star” as it were. In future posts I’ll share my reflections on some of the concepts, reflecting upon them, sharing how my thinking has evolved or gone deeper, and what I’d do differently – not to reject a good first try, but rather to thoughtfully set up the base on which to continue building.

What is Integrated Investing?